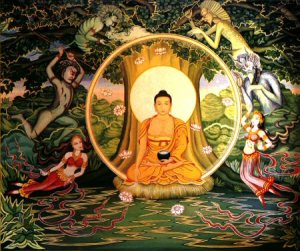 The Tree of Awakening

550 BCE – Siddhartha Gautama, was born in India destined to become a Hindu Prince. His father was a warrior King who sheltered him from the hardships of life, death and war.  Curious about the outside world, Siddhartha left the palace and saw an old man, an ill man, a dead man, and a suffering man. He was concerned that suffering was the inevitable end of life. This caused him to question why suffering existed. He returned to the palace and renounced himself as Prince so he could understand the meaning of suffering.

He journeyed throughout the Indian subcontinent, seeking answers from yogi’s and sitting in deep meditation for prolonged periods of time. At one point he sat in a cave and meditated so deeply that he stopped eating.  After many weeks he was near death, until someone became aware of him and gently offered him food and drink.  As he awoke he realized he had come no closer to understanding the meaning of suffering. If he had understood it, in death, he would not be able to share what he had learned with others. Once he regained his strength he chose to sit under a large fig tree in a conscious state of awareness.  As he sat under the tree, a fig fell on his head.  In that moment he realized that he had a choice. He could choose to be a victim of the fallen fig or he could choose to see that the fig was a gift that held a great lesson. This concept of choice “awakened ” him to the fact that he had choices regarding how he responded to suffering. This “enlightened” way of seeing became known as “Bodhi”.  It transformed him into the Buddha as “the enlightened one”. This specific species of fig then became known as the Bodhi Tree, Ficus religiosa .

After his enlightenment, it is said that Buddha stood with unblinking eyes gazing at the tree with gratitude. This tree was honored as a sacred shrine during his lifetime of teaching. Buddha went on to awaken others by sharing the Four Noble Truths and the Eightfold Path.

By accepting responsibility for our thoughts and actions we can release our self from the Wheel of Fate and achieve enlightenment also known as moksha or nirvana.

Suffering arises from attachment to desires.

Freedom from suffering is possible by practicing the Eightfold Path

These teachings are the foundation of Buddhism.

Around the age of 80, Buddha became weak and could no longer teach. His followers wanted to erect statues of him so people would remember him. Buddha’s request was to keep the sacred Bodhi Tree alive. He wanted it  to help others on their personal path of awakening.

Today, a Bodhi Tree lives at the Mahabodhi Temple in Bodh Gaya – Bihar, India, in the exact place where Siddhartha attained enlightenment 2,600 years ago. The original tree has been destroyed several times, but was replaced by trees and saplings grown from the seeds or branches of the original Bodhi tree.

According to legend, around 260 BCE, the Hindu Emperor Ashoka, a vicious military leader who witnessed the deaths of 100,000 people, was called to go to the Bodhi Tree. After sitting under the Bodhi Tree where the Buddha sat, he realized that non-violence was his true path. He chose to convert to Buddhism and built a series of stone pillars to fulfill his Dharma of spreading the teachings of Buddha throughout India. Later called the pillars of Ashoka, they were erected at Buddhist monasteries and sacred sites that marked the life of Gautama Buddha.

Around 288 BCE, a branch of the original Bodhi tree was taken to Sri Lanka by Bhikkhuni Sangamitta, daughter of Ashoka. It was planted at the Mahavihara monastery in Anuradhapura, India where it lives to this day. It is honored as the oldest living propagated tree in the world.

The Ficus genus has over 850 species of fig trees including Banyan and Sycomore figs. The Bodhi Tree, Ficus religiosa, or sacred fig is also known as Peepal, Ashwattha or Bo. Its fruit is edible, but not desired. All fig trees can produce fruit, but they need the right species of fig wasp to pollinate it. Edible figs typically come from the common fig, Ficus carica.

The Bodhi Tree is most closely related to Banyan tree (Ficus benghalensis) which sends down aerial roots from its branches. In contrast the Bodhi Tree tends to send its branches upwards as its roots buttress down toward the ground from the trunk. Bodhi trees can live to be over a thousand years old.

To be considered a “true” Bodhi Tree its lineage must be directly connected to the original tree that Buddha sat under. This has been accomplished through years of seed germination and the propagation of branches. Therefore thousands of trees in India and other countries descend from the seeds and branches of this one ancient and sacred Bodhi Tree.

Note on Bodhi seeds & beads. The actual seeds of the Bodhi Tree are very tiny, because they are formed within the fruit of the fig which is less that .5″. The Bodhi seed as a bead, is just a concept. There is not an actual bead that is a true Bodhi seed. Beads that call themselves Bodhi seeds, used in the creation of Malas, are imbued with the sacred intention of the Bodhi Tree. These “wooden” beads come from a wide variety of trees and plants such as Sandalwood (Santalum album), Rudraksa (Elaeocarpus ganitrus), Lotus seeds (Nelumbo nucifera),  Moon and Star Lotus seeds (Daemonorops jenkinsiana), Tulsi/Holy Basil (Ocimum tenuiflorum)  Coconut Palm (Cocos nucifera) etc… Malas beads can also be made from gemstones, lava rock, etc…

When creating a Mala with the intention of awakening, connect with the sacred spirit of the Bodhi Tree.

Quotes from the Buddha:

“All that we are arises within our thoughts.  With our thoughts, we make our world.” –  Buddha

“Your work is to discover your work and then with all your heart to give yourself to it.” – Buddha

“It is better to conquer yourself than to win a thousand battles. Then the victory is yours. It cannot be taken from you, not by angels or by demons, heaven or hell.” – Buddha

“No one saves us but ourselves. No one can and no one may. We ourselves must walk the path.” – Buddha

“Peace comes from within. Do not seek it without.” – Buddha

“The secret of health for both mind and body is not to mourn for the past, nor to worry about the future, but to live the present moment wisely and earnestly.”  – Buddha

“The whole secret of existence is to have no fear. Never fear what will become of you, depend on no one. Only the moment you reject all help are you freed.” – Buddha

“The wise ones fashioned speech with their thought, sifting it as grain is sifted through a sieve.” – Buddha

“There are only two mistakes one can make along the road to truth; not going all the way, and not starting.” – Buddha

“There is nothing more dreadful than the habit of doubt. Doubt separates people. It is a poison that disintegrates friendships and breaks up pleasant relations. It is a thorn that irritates and hurts; it is a sword that kills.” – Buddha