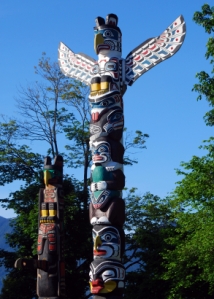 Totem is an Ojibwe (Chippewa) word meaning “kinship group.”  Totem poles were created from trees to recount family legends, clan lineages or important events.  It is estimated that over 4000 different tribes once lived in North America.

Today there are 513 Native American tribes recognized by the US Government.  The Navajo, Cherokee, Sioux, Blackfeet, Algonquian, Iroquois, Seminoles, Pueblo, Apache and Pomo are some of the largest tribes; most have been displaced from their ancestral land as European settlers began moving to the Americas in the 1600’s.

The Iroquois creation story – The World on the Turtle’s Back.

“A Great Tree of Life grew in a world high in the sky.  It lit the sky so all could see and cast its light down on a lower world made up of water.  The Creator lived by the Tree of Life where he tended the plants and cared for the animals. The hawks and eagles flew down to the lower water world, giant turtles and muskrats swam on the water’s surface. The creator grew lonely and created first woman. He also created first man in his likeness and taught his two children all that he knew.  The Creator told them to stay away from the Tree of Life and not to play around its trunk. But First Woman was curious and found a hole in the bottom of the trunk, she crawled through the hole and began falling toward the lower world of water. The Creator summoned the birds of the sky, to catch his daughter “Sky Woman” that she might not drown. As they flew above the deep waters, the grandfather of all turtles surfaced. The birds placed Sky-Woman on the surface of her new home. Muskrat swam to the bottom of the waters and brought up mud, which he placed on the turtle’s back. When she touched the mud that Muskrat had brought, it grew in all directions, becoming the Earth that we know today as the great Turtle Island.”

In the Ojibway tradition of storytelling there is a story of Grandmother Cedar, or Nookomis Giizhig.

In the Pacific Northwest there is a myth that: “The night sky was a pattern on a great-blanket overhead which was held up by a spinning world pole resting on the chest of a woman named Stone Ribs.”

“I was seeing in a sacred manner the shape of all things in the Spirit, and the Shape of all Shapes as they must live together like one being and I saw that the sacred hoop of my people was one of many hoops that made one circle, wide as daylight and as starlight, and in the center grew one mighty flowering tree to shelter all the children of one mother and one father. And I saw that it was holy.” – Black Elk