Cypress encourages us to see the natural transitions within the cycle of life. Cypress signals the end of a major phase in our life and the transition into a world of new possibilities.

The cypress tree, Cupressus sempervirens, was seen as the tree of immortality and deathlessness to the Persian prophet Zoroaster. Zoroastrian belief was based on his vision of one diety and the cosmic strife between the forces of light/good (Ahura Mazda) and dark/evil (Angra Mainyu). Angra Mainyu was seen as the originator of death. In death, a person was judged on their deeds as they crossed a bridge between eternal darkness or eternal light.

Followers of Zoroastrianism worshiped in “fire temples” where they maintained fires fueled exclusively by the wood of cypress trees. These fires were seen as symbols of divine light. A 4,000-year-old cypress tree dedicated to Zoroaster still lives in Abarqu, Iran today. 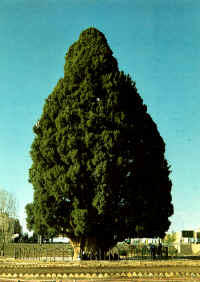 Cypress is the first choice for Iranian gardens and cemeteries. In Muslim tradition cypress is seen as a cemetery tree that wards off evil spirits and brings hope to mourners as it points to the sky.

In Athenian households, garlands of cypress were hung in the home to symbolize a time of mourning. Wreaths of cypress adorned statues of Pluto, the classical Greek god of the underworld. Cypress was also used as a smudge to clear the air during a cremation. The cypress spirit indicates a time of clearing and cleansing our space to create room for new experiences and opportunities.

In classical Greek tradition, cypress was associated with death and the underworld. The Roman poet Ovid recorded the Greek myth of Cyparissus who was turned into a cypress tree because he wished to grieve forever for accidentally killing his beloved pet stag. Cypress trees are named for him. The genus Cupressusis one of several genera within the very large Cupresaceae family that have the common name cypress. Cypress is native to areas in warm climates throughout the northern hemisphere. 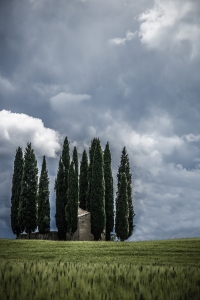 There are between 16-25 species within this genus, which are often defined as “Old World” or “New World.” Cypress honors death as a natural path to understanding the immortal nature of our soul.

Message: When cypress appears, we are being asked to honor the sacred death of the ego so the heart can prevail. This concept is similar to what some cultures call a shamanic death. It is one of releasing our attachment to outcomes so we can fully experience grief, loss and despair. This process is also related to the Native American concept of a vision quest. By releasing what we thought we were, we can begin to envision who we are to become. From this perspective death transitions us into life.

Challenge: Irrational fear of death or avoidance of allowing feelings to surface during a period of mourning.