The spirit of arborvitae provides a time of healing and new beginnings. Inspiration will come from the seeds we have planted.

Arborvitae, Thuja occidentalis, was the first “New World” tree brought to the “Old World” by French explorer Jacques Cartier. In 1536 Cartier and his crew fell ill with scurvy during an expedition in Canada. Members of an Iroquois tribe offered them tea made from the “Annedda” tree. When Cartier recovered, he brought seeds of this “miracle” tree to France, where it was planted in the Kings medicinal gardens and named “l’arbre de vie”. In Latin, arbor (tree) and vitae (life) means “tree of life.” Interest in its medicinal value as a source of vitamin C played an important role in the resurrection of botany as a science. In 1542 French physician Jean Fernel coined the word “physiology” to help bridge medicine with botany. This inspired the naming of the white matter in the cerebellum of our brains to be “arbor vitae” because its resemblance to this tree.

When the English began growing arborvitae, imported to them from the New World, they called it “cedar” because its scent was similar to the cedar boxes they were familiar with. But, those cedar boxes were imported and made with wood from the Cedars of Lebanon, Cedrus lilbni. Since the English had never seen a “true cedar” they misidentified the distinct flattened scale-like leaves of arborvitae as “cedar”. True cedars have needle-like pine leaves. Botanically, arborvitaes Thuja belong to the cypress family, while cedars Cedrus are members of the pine family. The name Thuja comes from the Greek word thuon meaning “fragrant wood.”

As native languages were lost the indigenous names of trees were replaced primarily with English, French and Spanish words. Thuja occidentalis, known as northern or eastern white-cedar, is native to eastern Canada and the north central and northeastern areas of the United States. Thuja plicata, or Pacific red-cedar, which grows to be 230 feet tall, is native to the Pacific Northwest. All are aromatic.

Arborvitae is honored as “Grandmother Cedar” and the Tree of Life in many native cultures of North America. Her gifts of wisdom and protection associates her with the north direction of the medicine wheel. Some Pacific Northwest tribes refer to themselves as “people of the red cedar” where Thuja plicata was used for totem poles, boats and shelters dating back to 5000 BCE. The word “totem” means kinship group in Ojibwa. Totem poles were carved to honor ancestors, legends, clan lineages and events. Arborvitae is a gentle yet powerful spirit that inspires us to honor our roots. 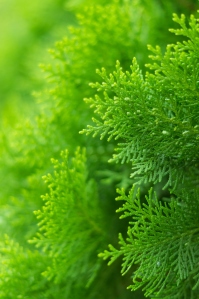 Message: Arborvitae inspires us to discern what is true during this time of creativity and new beginnings. It is up to us to search for truth, find our voice and honor our roots so we can move forward with increased clarity and purpose. If we have stumbled on our path, we must trust our instincts as we move forward with renewed energy and vision. New opportunities will arise based on the seeds we planted. This is a time of inspired creativity and growth.

Challenge: Feeling challenged and unmotivated. Being confused or angry for not knowing what to believe or who to believe. Something may be clouding our vision from seeing things clearly.

If you want more... you may be interested in having the actual Tree Spirit Tarot guidebook and card deck. The 204 page full-color book is sold separately from the deck of 78 cards. My goal is to ultimately find a publisher who can offer this as a box set. In the meantime, you can purchase the book and cards using the links below.

Thank you for your patience, support and love of trees.  Laural