Oak reminds us of our inner strength and integrity as we reconnect with our divine nature. This is a time to revisit our roots so we can heal old wounds and stand strong in our truth.

Oak trees, which can live to be 1000 years old, literally gave birth to one of the most epic stories of our divine nature. In 2000 BCE, the Oaks of Dodona, in Epirus Greece, were seen as wise oracles that offered wisdom when the sound of wind rustled through their leaves. This sacred grove of oaks was associated with the great earth mother Gaia. By 800 BCE, the Oaks of Dodona were seen as aspects of the Greek gods Dione & Zeus. In Latin, Dione was named dios or dei, she was the female counterpart to Zeus, whose name was deus or deiwos. In Sanskrit, Devi Mata (divine mother) and Dyaus Pater (divine father) were seen as the “shining ones” in the sky.” These shining ones who inspired the word “deity” were in fact the Sun, Moon, Venus, Mars, Mercury, Saturn & Jupiter.

In 300 BCE, the King of Epirus claimed the Oaks of Dodona as his religious center. He declared it to be the earthly dwelling of Zeus, the “divine father”. Oak trees were now symbols, of patriarchal and Roman imperial rule. In 380 CE, the Holy Roman Empire destroyed the last remaining Dodona Oak because of its “pagan” roots.

The Germanic people believed that trees had spirits, and that the sound of wind blowing through it leaves and branches was its voice. Ansuz, the fourth letter in the Elder Futhark of the Proto-Germanic language, represented the spirit as the “breath” or “mouth” of an oak or ash. The Saxon’s later split the Ansuz rune into three sounds: “o” (mouth), “ac” (oak) and “ae” (ash). This corresponds to Enlil, the ancient Sumerian “Lord of Wind” and protector of forests, who inspired the names El, Elohim and Elah, meaning “most high” or “mighty” in Hebrew. Elah also means mighty oak. When the Bible was translated from Latin to German the original names of El, Elohim, Elah, Adonai andYahweh became one word, which was “god”. This word was based on the Germanic words gheu, ghuto and gudan, meaning, “to invoke the sound of the wind”.

Ironically these tree-worshipping people were forced to convert to Christianity when their sacred oaks were chopped down by religious warriors. Oak trees continue to be symbols of strength and wisdom that remind us of our divine and enduring connection to nature. 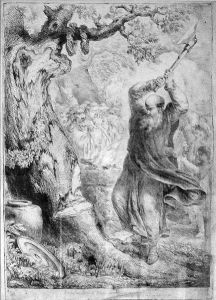 Message: The spirit of oak is held deep within in our collective memory. It asks us to listen to the sound of the wind so we can hear the voice of the divine within us and around us. By connecting with the energy of words we can listen with an open heart. Oak signals a time of stepping into our divine nature and peaceful power with honesty and integrity. By owning our truth and our voice, we will gain a clearer sense of what we need to accomplish and how. By choosing our words wisely we will be able to stand strong yet remain open, even in the face of adversity.

Challenge: Focusing of what can others do for us versus working together for the common good. Being rigid, hard and closed.