When cashew appears, we have reached a point where we can relax and reward ourselves for the work we have done. This is also the time for long-term planning to create a safe and sustainable future.

The cashew tree, Anacardium occidentale, is a tropical evergreen tree native to Brazil. The indigenous Tupian people called it acaju, meaning “the nut that produces itself.” When the Portuguese discovered Brazil, they called this fascinating nut caju, which was translated as cashew. Cashews have been exported from Brazil since the 1500s to be grown as a food crop in other tropical countries. The genus name, Anacardium speaks to the unusual shape of the cashew apple in relation to the seed or nut. Anacardium is derived from Greek ana (outside or above) and kapola (cardia or heart) meaning “the heart above or outside.” This speaks to the reward awaiting within us when we listen to our hearts instead of our minds by getting out of what is holding us. 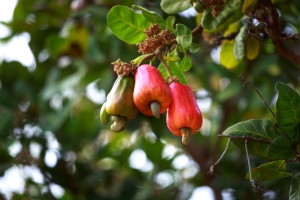 The cashew tree, Anacardium occidentale is a tropical evergreen that produces both the cashew nut and the cashew apple. While the nut is the primary crop of the tree, the cashew apple, located above the nut, is used to produce a sweet, astringent fruit juice or distilled into liquor.  In Brazil, the fruit or cashew apple, called maranon, is more popular than the nut.

Cashews are treasured for their amazing versatility. Roasted and salted cashews are highly prized snacks. In Indian cuisine cashews are used whole, ground into paste or turned into sauces and powders. Cashews are becoming an alternative to dairy in the form of cashew milk and butter. Cashew oil is extracted from the cashew nut for cooking. There are nearly 200 patents that use cashew oil extracted from cashew shells. This oil is used in the manufacturing of brake linings, as a wood preservative, an anti-insecticide, a waterproofing agent, a lubricant, and in paint.

This high demand for cashews has unfortunately created serious hazards in countries that exploit their workers and endanger their health. Raw cashew nuts contain the same toxic substances as poison ivy, and in countries such as Vietnam they are shelled by hand. For this reason, it is important to source from Certified Fair-Trade providers who are invested in creating sustainable and safe labor practices. The cashew tree offers numerous rewards, but to truly benefit from these rewards we must remain heart-centered.

Message: Cashew reminds us of our desire to invest in the long-term with sustainable rewards. Through vision, intention and hard work we have reached a place where we can reward ourselves and others for what has been accomplished. Be grateful, and focus on the present moment to rejuvenate the mind, body and soul. This reward will undoubtedly stimulate new ideas and goals that bring renewed focus for the future.

Challenge: Feeling scattered and unable to focus or finish the tasks at hand.Having a lack of accomplishment that leads to empty and unfulfilled promises.

If you liked what you read and want more... you may be interested in having the actual guidebook and card deck. The 204 page full-color book is sold separately from the cards. My goal is to find a publisher who can offer this as a set. In the meantime, you can purchase either the book or cards via these links. Thank you for your support. Laural