The spirit of plum speaks to the value of patience and the importance of remaining calm during challenging times.

Plums are native to China, Europe and the Americas. The English word plum comes from the Latin word prunum meaning plum tree. Plums were one of the first fruits to be domesticated along with figs and dates around 10,000 BCE. All plums are stone fruits within the Prunus genus, along with cherries, peaches, almonds etc. Plums and apricots also share the same subgenus called Prunus, which is further divided into Prunus (Old World Plums), Prunocerasus (New World Plums) and Armeniace (Apricots).

European plums Prunus domestica and Japanese plums Prunus salicina are the most popular species of plum. Prunus mume, which is classified as an apricot, is also called Japanese plum. In Chinese folklore the late winter blossoms of Prunus mume were known as “plum blossoms”, which symbolized beauty, hope and perseverance during times of struggle. 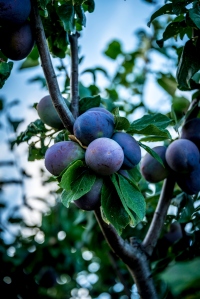 The primordial Chinese character Li means plum or plum tree. Li is also known as the light-giving force of fire and sun. Hunter-gatherers collected sun-dried plums after they fell from the tree onto the ground. As a stable source of food and medicine, dried plums were carried from China via the Silk Road to the Fertile Crescent. The ancient Greeks and Romans began prescribing prunes as medicine, which increased their popularity. Orchards of plum trees grew throughout the Middle East and Mediterranean basin as various cultivars were grafted to create better quality plums and prunes for medicinal and culinary use. By the late 18th century the word “plum” was even used to describe something desirable. In 1856, Frenchman Louis Pellier traveled to California during the Gold Rush and grafted a New World plum Prunus americana with an Old World French plum called Petit d’Agen. This hybrid plum gave birth to the California prune industry. Today there are over 1,000 plum cultivars grown for prune production throughout the world.

The process of transforming a fresh plum into a prune requires patience and perseverance throughout the growing, harvesting and drying process. The traditional sun-drying method requires hand picking plums at just the right time and tending them carefully for several warm, dry days and nights. Dried plums have been a healthy and nutritious fruit for thousands of years. They are high in fiber, iron, potassium, minerals and phytochemicals such as antioxidants, which can build bones, reduce cholesterol and lower blood pressure. Prunes are often used to improve digestion and to relieve issues such as constipation and hemorrhoids.

Message: The plum spirit reminds us to be patient until the right moment arrives before acting. While we wait, we are encouraged to continue moving forward with other activities. Patience understands the importance of timing in all aspects of our life. Now is not a time for hasty decisions or actions. Trust in the process that moves beneath the surface.

Challenge: Impatience, irritability, anxiety and a lack of trust that life will work itself out.